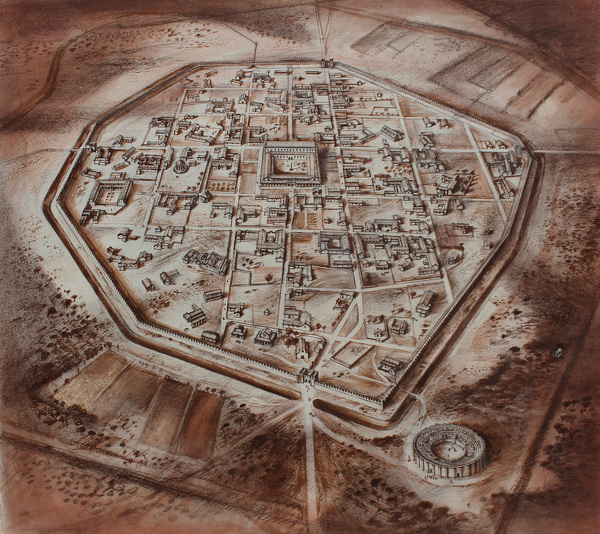 ​Exhibited: Sir John Soane's Museum, 25 October 2013 - 25 January 2014, Alan Sorrell: A Life Reconstructed.
Literature:
Sacha Llewellyn & Richard Sorrell (ed), Alan Sorrell; the Life and Works of an English Neo-Romantic Artist, (Bristol: Sansom & Co.) 2013, p 140-157.
The site of Silchester is about 10 miles south of modern Reading.
Sorrell often used the aerial view to show the whole of a site. His experience of flying in wartime aircraft equipped him well for the understanding of this new perspective.
Silchester was abandoned when the Romans left Britain, and it was never repopulated. The site is now covered by cornfields.
Alan Sorrell made a considerable reputation for his remarkable ‘reconstruction’ drawings of ancient sites, shown as they appeared in their heyday. The drawings and paintings combine his keen interest in history, and collaboration with archaeological and historical experts, with a vivid artistic imagination and sense of spatial awareness.
This work brought him into close working relationships with many of the foremost archaeologists of his day, including Sir Cyril and Aileen Fox, Sir Mortimer Wheeler, Leonard Woolley, Kathleen Kenyon, Ian Richmond, Richard Atkinson, Stuart Piggott, V E Nash-Williams, Stuart Rigold and many others.
As was his practice with mural paintings, Sorrell made sketches and preparatory drawings, which led to the finished reconstruction drawings. These works were commissioned by the Ministry of Works (English, Welsh and Scottish Heritage), The
Illustrated London News, television companies and others.