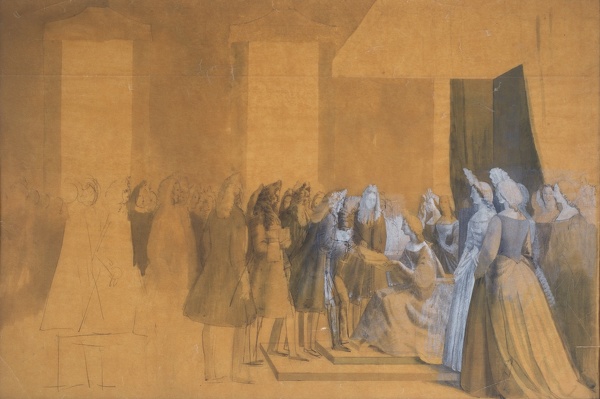 Provenance: Provenance: The estate of R Schwabe; thence be descent, inherited by his granddaughters through his daughter.

The English and Scottish commissioners present articles of agreement for the Parliamentary Union of the two countries to Queen Anne at St Jame's Palace in July 1707 was one of eight subjects set by Sir Henry Newbolt for the decorative scheme of history paintings in St. Stephen’s Hall in the Palace of Westminster.  The paintings, by eight artists working as a team under a Master Painter, Sir David Young Cameron, were executed in matt oil colours in marble medium.  Orpen was originally scheduled to paint this subject but dropped out.  Cameron invited Monnington, then aged 23, to tackle it instead.  Monnington was the youngest of the team by ten years and his inclusion - despite grumblings from Rothenstein about giving important wall space to untried youngsters, (William Rothenstein, Since Fifty, 1939, p 25), is evidence of his prodigious early reputation.
The finished work is 9 x 15 ft.   Monnington clearly based his composition on Peter Angelis’s Queen Anne and the Knights of the Garter, painted in 1713, (National Portrait Gallery). A small-scale preliminary oil sketch (31 x 44 ¾) was given by Monnington to Cameron, who bequeathed it to the National Gallery of Scotland.  A sanguine study for the head of a nobleman was purchased by the Contemporary Art Society and presented to the British Museum in 1927.Monnington was working on the Cartoon when visited by Tonks in February 1927; Tonks, Monnington reported to his brother, seemed to like the work very well…. Whatever else he may be, Monnington added, Tonks is a very great critic.  The final paintings were unveiled on 28 June 1927 by the Prime Minister Stanley Baldwin. 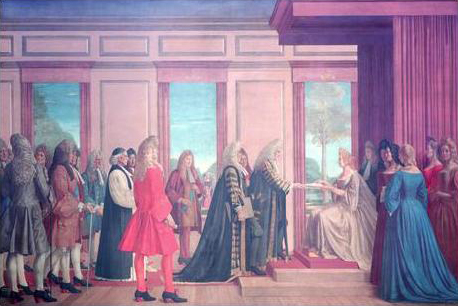