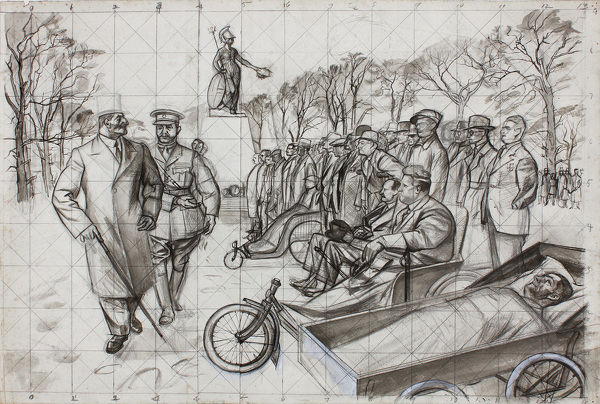 
Provenance: The artist's son, Richard Sorrell
Literature:
Sacha Llewellyn & Richard Sorrell (ed), Alan Sorrell; the Life and Works of an English Neo-Romantic Artist, (Bristol: Sansom & Co.) 2013, pp 60-61.
A final sketch for the mixed media painting, this was made before the Second World War and is a grim reminder of the terrible human costs of war and the callous indifference of the authorities.
David Lloyd George promised the soldiers who fought for ‘King and Country’ that they would return to a ‘land fit for heroes’.The land they returned to had changed profoundly, yet it met hardly any of their expectations: of those lucky enough to return,most collected their civilian suit, a pair of medals and a small cash payment, then joined the ranks of those looking in vain for work; others collected a disability pension but were never able to work again.
Sorrell was fourteen in 1918, and had spent much of a sickly childhood in a Bath chair ; perhaps this made him more sympathetic towards the victims of the war.
In this harrowing picture, a statue of Britannia on a pedestal ironically surveys the scene: a civilian grandee with a hawkish expression watches a pathetic parade of war-wounded, some so grey-faced that they seem already to be ghosts.The picture, a grim foreboding of the carnage to come, called on Sorrell’s memories of the First World War veterans.