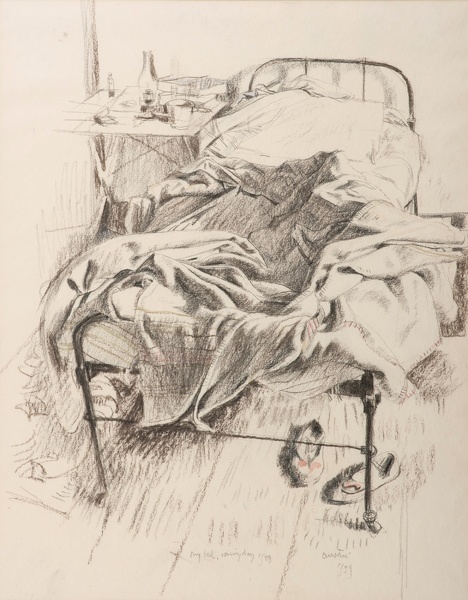 
Signed, dated and inscribed with title

Figures resting or sleeping are amongst the subjects that Austin drew consistently. In the domestic family routine which  formed the backdrop to his work, Austin found an endless source of inspiration. Drapery was a subject that he was particularly drawn to.

Austin worked as an Official  War Artist between 1940 and 1944, whilst he was based in Ambleside with The Royal College of Art, which was evacuated there.  Mahoney and Percy Horton were among the male staff. The students were housed in two hotels, men at The Queens and women at The Salutation.

In spite of requisitioning two hotels, conditions for the Royal College of Art students were cramped. The majority of space was required for accommodation leaving precious little room for the studios which were mostly set up in lower rooms and suffered from lack of light.

The majority of Austin's  war work is in the Imperial War Museum.

For a fuller account of this period see biographical essay, pp and The Artist as Evacuee, The Royal College of Art in the Lake District, 1940-45, Dove Cottage and the Wordsworth Museum, Grasmere 1987.