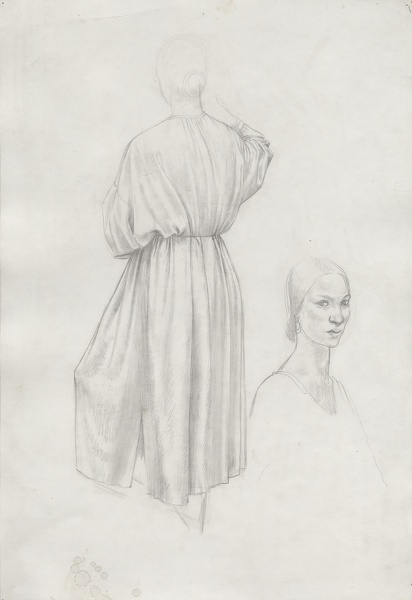 Hover over the painting to magnify (there may be an initial delay while the magnified image is loaded)
£8,000
Free shipping
Enquire
Add to cart

Provenance: The Artist's son John Monnington until 1995, David Thompson until 2018

'My picture will be very beautiful. I have drawn 11 plates of melon, pink melon; 9 glasses of wine some empty, because they have run out, & 38 people'. Letter to Mother, 24th August 1922.

The 'Marriage at Cana', started in 1922, is the principal painting produced by Knights during her time at the British School at Rome.

It depicts the miracle of the water turned into wine, (related in John 2:1-12). The setting for the painting is the Borghese Gardens adjoining the British School at Rome. The setting is also reminiscent of the background devised by Piero delta Francesca for the fresco of 'The Adoration of the True Cross' in the Church of S.Francesco in Arezzo, visited by Knights prior to starting work on her own composition. 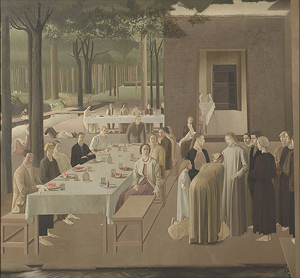 The artist includes herself among the guests, along side, in the earliest studies, Arnold Mason. Tom Monnington, who did not arrive at the British School at Rome until 1923, is included in later studies at the far end of the table, in effect next to Mason. As known rivals over Knights they clearly made an ill-suited pair for a marriage feast and Mason is subsequently omitted from the final composition.