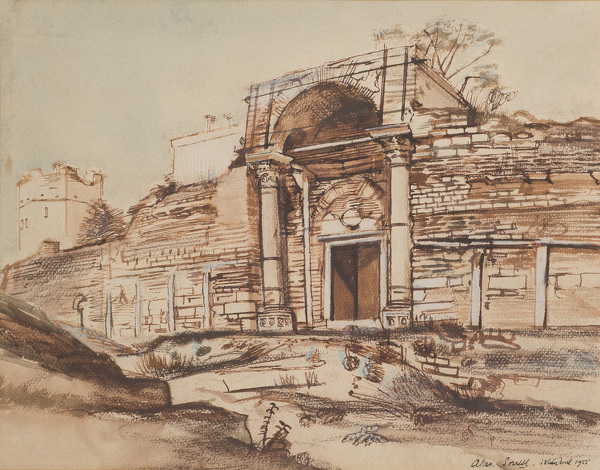 Literature:
Sacha Llewellyn & Richard Sorrell (ed), Alan Sorrell; the Life and Works of an English Neo-Romantic Artist, (Bristol: Sansom & Co.) 2013, p 172-3
1953 marked the 500th anniversary of the fall of Constantinople in 1453.  This was noted in the letter page of The Times and a great deal was written about the state of decay of the vast defences constructed by the Emperor Theodosius in 413.  The Theodosian Walls of Constantinople had been built to protect this capital city of the Eastern Roman Empire from the attacks of the Goths and othe barbarian invaders, and they had been supremely successful in doing so for over a thousand years, allowing the city to thrive and to continue as, amongst other things, the repository of all Classical learning.
It was agreed that Sorrell should travel to Istanbul to make some studies of the ancient walls, and from these make a reconstruction drawing of them.  On the same trip he should also visit Athens, Mycenae and Pylos in Greece and draw the sties of ancient cities there.