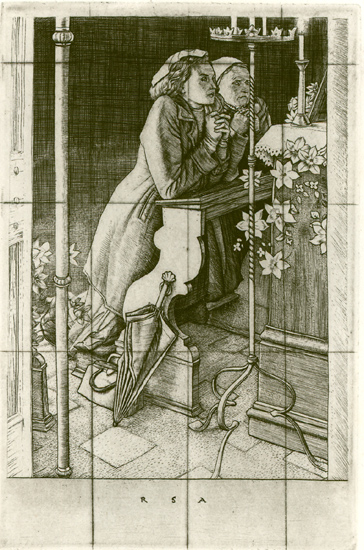 Praying appeared as a motif in several of  Austin's wartime prints - for instance Evening, 1940. The woman nearest the viewer is  Eleanor Hudson, (Austin's student and mistress) a watercolourist, etcher and designer best known for her depictions of women at work during the Second World.

The Second World War virtually brought his printmaking to an end. Austin would take many months to complete a plate and the unsettling effect of the war forced not compromise but a halt to that activity.  Besides, his teaching commitments with the RCA meant that he spent a lot of time travelling between London and the Lake District where the college had been evacuated. He made a few plates in the late 40's and early 50's but the wizening of his thumb prevented him from handling the burin effectively from 1951 onwards. Peter Black, Robert Douwma Catalogue Twenty  Nine, p 5

Copies of this engraving are in the collection of the British Museum and the Fitzwilliam Museum.