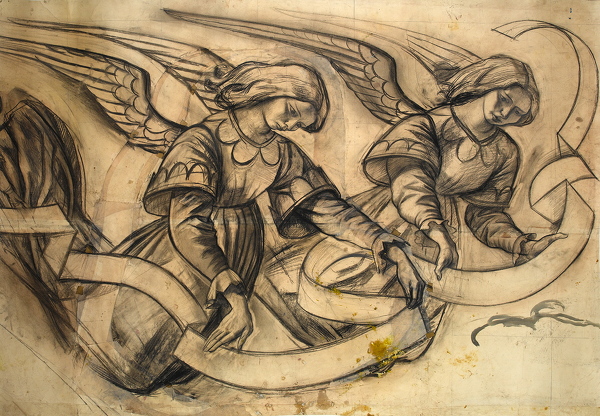 At Old Bexhill, the parish was restoring the church and wished to recapture some of the quality of medieval wall paintings, a subject on which E.W. Tristram, former tutor in mural painting at the RCA, was the national authority. He recommended Sorrell, a choice approved by the Bishop of Chichester, George Bell, one of the few major patrons of new art in churches at the time. To either side of an opening in the north aisle arcade, where the two spandrels barely met in the middle, Sorrell designed a composition that balances the patrons of the church, Saints Peter and Paul on the left, with the local Saints Wilfrith and Richard in episcopal robes on the right. A flight of angels holding a text provides a link between the two halves across the sky at the top. There are many pitfalls in work of this kind, and Sorrell managed to avoid them with a work that is based on sound drawing and design, fitting into the medieval context but not self-consciously archaic. (Alan Powers, Murals and Public Paintings, chapter V of Alan Sorrell, The Life and Works of An English Neo-Romantic Artist, Sansom, 2013, p 127).
We are grateful to Richard Sorrell and Alan Powers  for assistance.