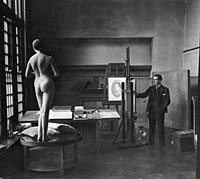 Decorative and genre painter, born in Bexley Heath, Kent. He was a cousin of the sculptor and printmaker Eric Gill. He studied at the Slade School, and in 1913 won a scholarship to the British School at Rome. His scholarship was interrupted by the First World War: he served in France 1915-18 and was appointed an Official War Artist. From 1922-25 he was a member of staff at the Royal College of Art. He died in South Africa in 1940, while working on a series of murals for the Magistrates Court in Johannesburg. His work is held in the Tate Gallery and the Imperial War Museum.

Gill can lay claim both to being the first painter to win a scholarship to the British School at Rome and to have produced its most iconic image: Allegory, 1921. He also started the fruitful tradition of scholars taking up residence in the small village of Anticoli Corrardo, just south of Rome, during the hot summer months. However, like many of the Rome Scholars who came after him, there is a sense that Gill never fulfilled the remarkable promise of his early work. After returning from Italy his paintings appear to be caught uncomfortably between two desires: on one hand, to continue in the nineteenth-century tradition in which he had been trained, and, on the other, to embrace something more contemporary and avant-garde. He was a keen photographer and also a novelist. 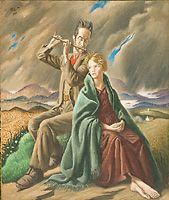 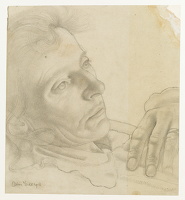 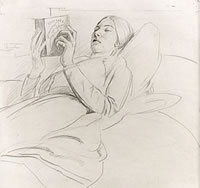 Colin Gill
Study for L'Allegro, circa 1920