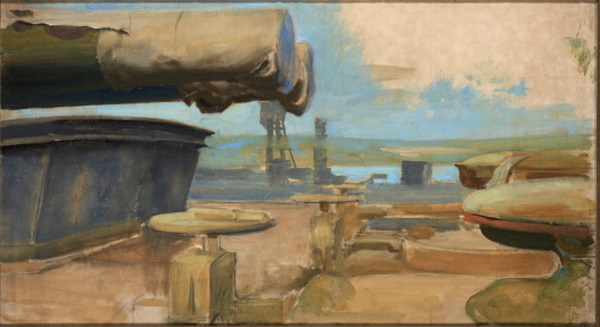 A.K. Lawrence was active in both World Wars. In 1914, he had voluntarily joined the Northumberland Fusiliers’ 19th battalion (2nd Tyneside Pioneers), which was posted to France in 1916. He was mentioned in despatches in January 1917, most likely for his actions during the latter stages of the Battle of the Somme. In World War Two - too old to serve - he worked an Official War Artist.

Guns - and particularly the inside of the barrels - were often wrapped to protect them from corrosion by the weather and the sea spray. 15’’ or 16” guns of this type were typically fixtures on a battleship or a battlecruiser. The location is likely to be a Royal Navy dockyard - there’s a big crane in the background - while the hilly landscape across the water suggests Plymouth, Rosyth,  Invergordon or perhaps somewhere on the Clyde.

We are grateful to Ian Jack for assistance.