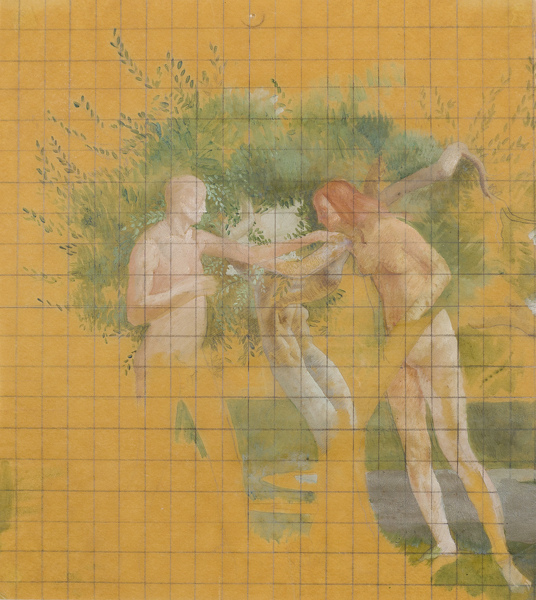 Monningtonï¿½s Allegory (Tate Gallery) was the major work of his tenure as Rome Scholar in Decorative Painting. The cartoon and related studies, commenced in the Spring of 1924, occupied the larger part of his second year. He commenced the execution of the painting, which was to occupy his third and final year, in March 1925; it was purchased in Rome, by Jim Ede for the Contemporary Art Society before it was completed, and was presented to the Tate Gallery in 1939. The exact meaning of the Allegory is unclear and Monnington himself remained elusive about it; invited by the Tate to explain it, he replied, The idea is a bit complex and was based on the story of the Garden of Eden, but rather a personal interpretation of itï¿½ (letter of 17 May 1953). When pressed, a few years later to elaborate, he answered, ï¿½I donï¿½t think this picture has anything to do with the Garden of Eden story, but I am no more able to explain its exact meaning now than I was at the time I painted it. The whole design certainly had a very particular meaning and purpose and was an attempt to express in pictorial form my attitude to life - almost my faith (2nd April 1957). Having to be content with this, the Tate Gallery retitled the picture Allegory - Monnington having always referred to it simply by the title Decoration. Iconographically it contains elements of several myths but most obviously The Garden of Love; specific episodes within the painting are reminiscent of Adam and Eve; Apollo and Daphne; The Fountain of Youth. Luciano Chelles has pointed out that the composition is to some extent an adaptation of Piero della Francescaï¿½s Death of Adam (San Francesco, Arezzo) and reproduces specific elements such as the figure sitting on the ground and the placing of a large tree at the centre of the composition. Ricketts and Shannon, asked by the Faculty of Painting at the British School to report on Monningtonï¿½s progress commented that they found Monnington, ï¿½keenly alive to the merit of the Masterpieces he had seen in Italy and alive to the technical practises of the Mastersï¿½ (12.1.25) The woman running to the right essentially reproduces (in reverse) the figure of Flora in Botticelliï¿½s Primavera. The presentation is also reminiscent of the fleeing figure in Botticelliï¿½s Calumny of Apelles. Monnington would have seen both paintings in the Uffizi during the month long study trip to Florence (February/March 1924) undertaken immediately prior to starting his Allegory.