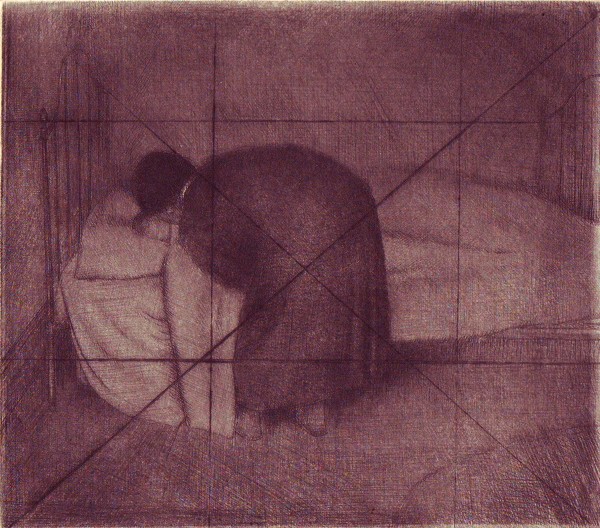 Figures resting or sleeping are amongst the subjects that Austin drew consistently.  In the domestic family routine which formed the backdrop to his work Austin found an endless source of inspiration.

This etching with dry point, printed posthumously from the canceled plate, is amongst Austins most celebrated images.

The earliest impressions were pure etching; drypoint was added and the burr was then removed.

Austin won the Rome Scholarship for engraving in 1923 and spent 3 remarkable years in Rome before teaching engraving at the Royal College of Art, 1927-44, becoming Professor in the Department of Graphic Design, 1948-55.  He was a meticulous craftsman-engraver and a vigorous draughtsman, as his series of drawings of Women's Auxiliary Air Force and ballooning activities done during World War II shows. The Tate Gallery holds his work.

The Ashmolean Museum, Oxford, organised an exhibition of his work in 1980.

More recently he was the subject of two shows at the Fine Art Society plc (2001 and 2002), the latter organised in conjunction with Liss Fine Art Ltd, and a show at The Royal Academy of Arts in 2009; (he was elected a Royal Academician in 1949).