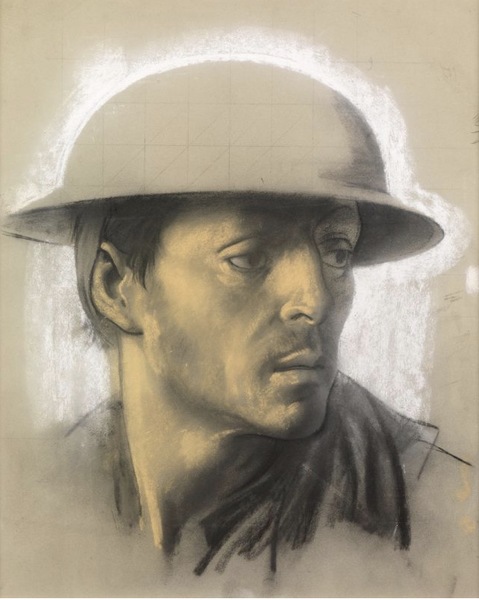 Lawrence volunteered for the Northumberland Fusiliers, and embarked for France in early 1916 as temporary Second Lieutenant of the 19th battalion. Between February and June, the company made their way towards the front line, stopping in Vielle-Chapelle and La Couture to build reserve trenches, repair existing ones, and carry out general field maintenance. But it was not until his battalion marched from their camp in Mailly Wood through No Man's Land on 6 July 1916 that they witnessed the savagery of the Somme on its vastest scale. An account of the 19th battalion's service, written by Captain CH Cooke and illustrated by Lawrence, recalled the 'infinite tragedy' of the scene, where tens of thousands of bodies 'lay in shell-holes, in bits of trenches, but chiefly in the open'. It was 'tragedy enough to sicken the most callous'. By July 15th 1916 the battalion was in Bray, awaiting orders for work in Trones Wood. The soldier in our sketch appears in another drawing by Lawrence, done on July 5th 1916 and inscribed 'Le Bois de Trones'. Lawrence did not return home until March 1917, when he was posted to the IV Corps school in London as instructor, and upon discharge in 1919, continued his studies at the Royal College of Art.

This portrait head is similar to that of one of the figures in Lawrences lost masterpiece The Altruists, first exhibited at the British Empire Exhibition, Wembley, 1924:

We are grateful to the Maas Gallery.